This month ESPO takes you to Scandinavia, more precisely to the Port of Kokkola in Finland, for an interview with Mr Torbjörn Witting, who leads the Port and can look back to over 25 years of service in the Port! In what follows, you will read more about his long term vision for the Port, his view on the revision of the EU’s TEN-T policy, the role of hydrogen in the Port and how he got into the port sector.

Can you briefly tell us about the Port of Kokkola? What are its main characteristics and challenges?

The Port of Kokkola is the third largest port in Finland, influencing particularly the middle and northern Finnish traffic flows and additionally, transit cargo from and to the Russian market, creating a natural link in the East-West trade. The Port consists of three port structures: the Deep, the General and the Silverstone ports, each in different developing phases and each designed to handle specific, different cargo types.

The Port of Kokkola is Finland's largest bulk port and largest rail port, with rail traffic accounting for between 60-70% of the Port’s total traffic flow. We are also handling a wide range of other cargo types such as containers, project cargoes (windmills especially), and general cargo.

The largest challenge seems to be the high fluctuation in global markets that often first affects the flow of raw material both in the start of a downturn, but luckily also in the beginning of an upturn. Another challenge is to time port investments and operations right according to the mentioned situations.

What is your long-term vision for the Port of Kokkola? What are the main investment projects for the coming years?

The objective for Port of Kokkola is to provide competitive logistical solutions for new and existing clients of the Port. We are implementing this task by having a diversified strategy for each port structure and then developing/investing accordingly. We have one port for raw material in bulk, one for containers and project cargo, and one for general cargo including light bulk products. The long term goal is to grow in volume and to continuously be within the three most important national ports.

The main investments are creating a third panamax quay in the Deep port, filling up in total 40 ha of new areas in the Deep and Silverstone port, and building a new container and RoRo quay in the General port. As the Port of Kokkola has a tool-port strategy, we will also invest in cranes, warehouses and special terminals.

The Port of Kokkola is Finland’s biggest bulk port. How is this business evolving? What are the challenges? Do you experience the current strong global demand for raw materials in the Port of Kokkola?

The Port has invested to a great extent by building the Deep port, which is almost finished, in accordance with our bulk strategy. The Deep port will have a total area of600.000 m2, of which 100.000 m2 are yet to be completed. It is good to still have some capacity in the Deep port to develop due to the increasing demand and due to the requirement for different areas (terminals) for different bulk products to avoid contamination. The contamination prevention is handled to satisfaction but the challenge for the port is that one terminal with a specific product type is full but another terminal has good capacity but can not handle the other cargo type because of risk of contamination.

The Commission prepares a review of the TEN-T policy. What are your main priorities for your port in that respect? Has the port benefitted from being part of the TEN-T comprehensive network?

First the TEN-T concept having both comprehensive and core corridors and ports is a very good concept and works well as it has been planned. It seems that the Finnish actors could be somewhat bolder in presenting new corridors and ports that rightly and with good reason could be a part of higher status. In the present situation and referring to this, Finland could rightly have more than one new port with core status. The Port of Kokkola’s impact on core corridors in the middle and northern parts of Finland is high. One example is that the main railway line passing the port is filled up with cargoes to and from the Port of Kokkola by over 80%. In that sense, the Port functions as a core port regardless of the presence of an acknowledged status.

To transport the goods to the desired destination, a smooth connection between the port and the hinterland is needed. Could you briefly tell us how the port is connected with the hinterland? What are the main challenges?

The main link between the Port and the hinterland are the various railway connections. These connections have been greatly enhanced during the last 10-year period and still ongoing. The investments are enhancing capacity with double tracks, new shunting yards and the electrification of tracks. The challenge is that the investments are not keeping up with the needs or are not finished fast enough.

The Port of Kokkola is the main transit traffic port in Finland for Russian cargo. Political tensions between the EU and Russia have been rising during the last years and have already resulted in sanctions being imposed to one another. Are you monitoring these developments? Have you experienced any impacts for the Port of Kokkola?

The Port has not experienced any larger impacts of sanctions to this date and we are monitoring this continuously. I am personally a great admirer of the way the President of Finland is approaching this complex context – keeping up a constant and dynamic dialog with the main leaders of Russia in the first place, instead of pursuing restrictions.

The Arctic route is not relevant for the moment for the Port of Kokkola. The Kokkola region has ice restrictions approximately three to four months per year and the port(s) are kept open by icebreakers during this time. In the case of the Arctic route, to my knowledge, this route should be kept open six to eight months per year to provide a commercial route. For the moment, when winter and ice come suddenly, there are up to 20 ships struggling in the increasingly thick sea-ice on the Northern Sea route.

European ports welcome the extension of the EU Emission Trading System (ETS) to maritime transport, in order to lower emissions by putting a price tag on emissions from shipping. However, ESPO sees under the current proposal a risk of carbon and business leakage to neighbouring countries outside the scope of the ETS. How do you view the impact of this proposal for the Port of Kokkola?

From a Finnish perspective, being an island in regard to the rest of the EU, it is crucial that ice breaking is taken into account as compulsory as it is a normal occurrence in Finland.

To prevent carbon and business leakage, which has a high potential risk in all edges of Europe and also in Finland with regard to transit traffic from third countries, it is important that decisions are taken to prevent leakages. My estimate is that the now planned 50% reduction rule will not be enough to prevent leakages – for third countries cargo traffic the emission system should not be applied at all.

Quite a few European ports are preparing for the arrival of the hydrogen economy in Europe. Is hydrogen relevant for the Port of Kokkola? Are there any hydrogen projects being realised in the port? Do you believe hydrogen will become a global energy commodity?

Hydrogen and all of the renewable energy concepts are very exciting. The port is now providing logistics for land-based windmills and aims for off shore windmill farms to be built in the Bay of Bothnia. Only the land-based windmills planned to be built during the coming 5-6 years in the Kokkola region and middle part of Finland will be over 2500 pcs and will provide a substantial increase of produced renewable electricity – comparable to over 11 regular size nuclear power stations! The challenge will be the intermediate storage of electricity – we believe that hydrogen will play a definite and important part in this. We have hydrogen start-ups connected to the Port and Kokkola Industrial Park (KIP) next to the Port area.

How did you get into maritime transport? How did your career path lead to this position?

First I just love the port business and the community, this for many reasons – it is still a people’s business at heart, it has challenges outside or inside each and every day, and all over the EU and the world, port people recognise each other and usually it is easy to approach any port and to feel welcome when visiting – welcome all also to the Port of Kokkola!

I’m celebrating my 25th year working at the Port of Kokkola this year. I was first employed in the Port as the second in charge, taking care of the commercial side of our port but also acting as finance manager. For the last 17 years I have been port director or today CEO of the Port company.

My background before the port sector was in business and international affairs and earlier in corporate strategy planning. It is easy to conclude that I have benefitted and had used all of the experiences I accumulated before starting at our Port. I’m proud that the Port of Kokkola has developed intensely and that we today are one of the leading national ports in Finland. 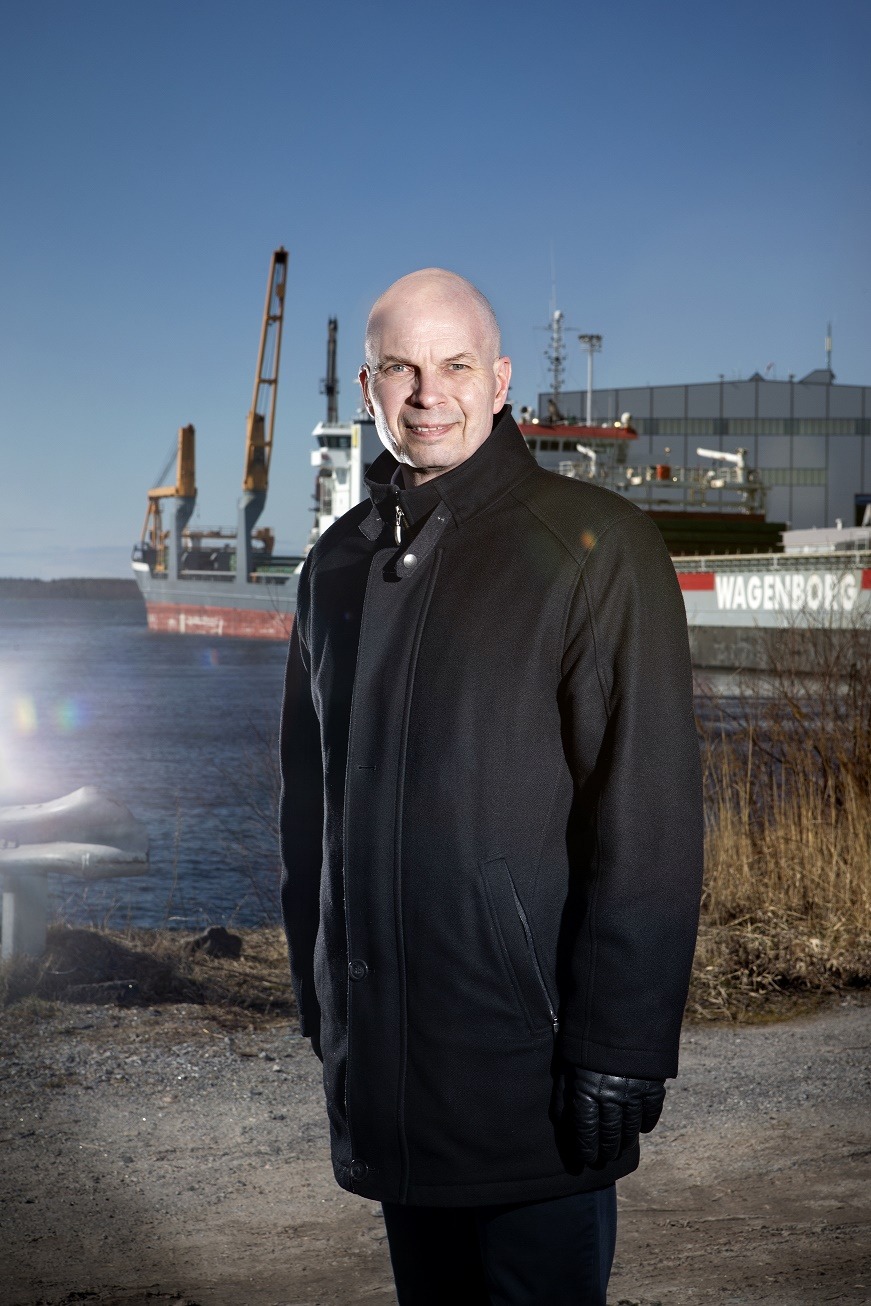